skip to main | skip to sidebar

The Moulding of Harry Manx

The mould making of the Harry Manx wax is well underway with more than half the silicone rubber poured.I've been taking pictures of the process and will include a breif description.
The first step is to dismantle the wax so that the mould will come apart easily in two halves.
So..... off with his arms! 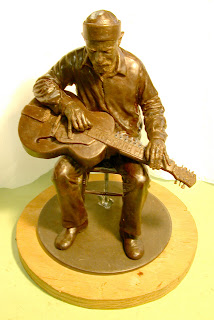 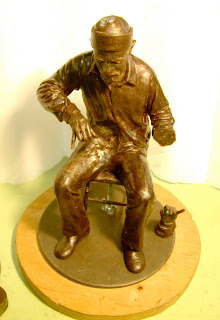 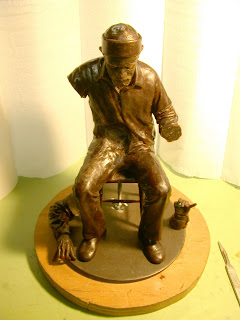 By removing them and casting the waxes separately the detail can be carefully preserved. Reassembling them is easier than struggling with a mould with difficult and complicated seam lines.

Now the clay is built up around the back to make a platform and define the clay blanket which in will turn become the part that will be rubber. 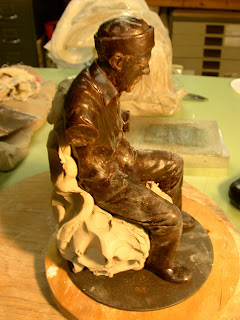 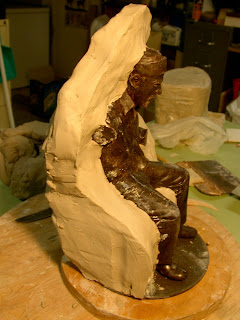 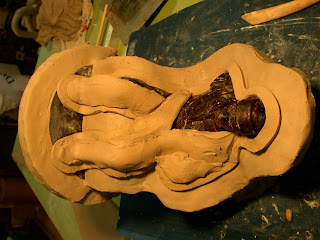 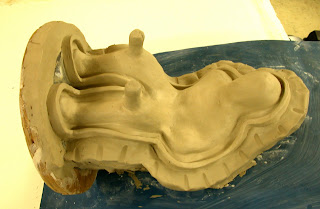 The plaster is applied to form the holding or "mother' mould. This will be used to make the space for and support the inside rubber section of the mould. 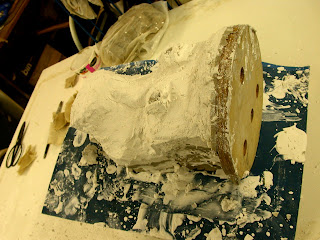 Here on the left is the back half of the plaster mother mould and on the right is the back of the model with a pvc pipe to form the pour spout. 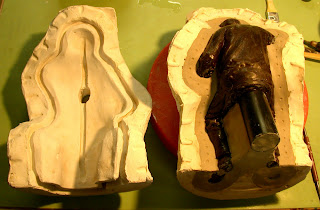 This is the mould ready for the pouring of the silicone rubber. It has a honey like viscosity and when the catilyst is added you have about 30 minutes to pour it. When things go wrong at this point it can be a very messy business! Mould making is an art in itself with each one unique and dictated by the shape of the sculpture. Much planning and time goes into it. Experience is an asset. To learn mould making well you have to make every mistake there is to make at least once. 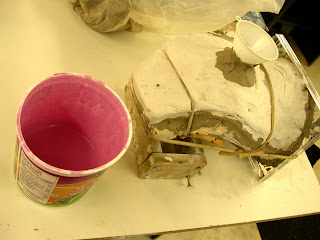 Freshly cracked mould. Now the other half will be cleaned up and prepared for the rubbber. 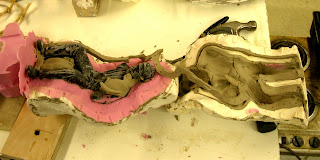 To get good detail its best to paint in a layer of hot wax. 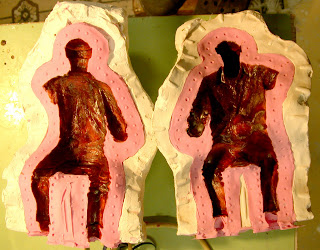 This is the two halves of the mould with a wax cast in the middle. 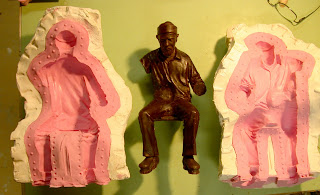 This is the finished copy, assembled, cleaned up and ready for the lost wax process to turn it into bronze. 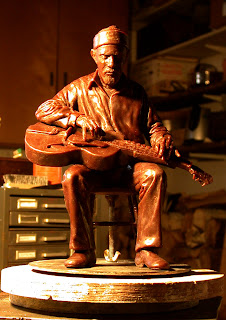 It is now out of my hands and in the foundry going through the highly skilled, laborious and very technical process of being cast in bronze. Its always a strange feeling when you leave a piece at the foundry. It kind of feels like the first time you say goodbye to your child at kindergarten. You hope for the best care and that they will be in good shape when you pick them up.
Posted by Peter Sloan at 10:33 AM No comments: 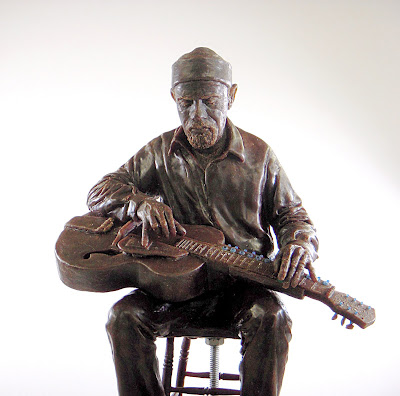 This is my first attempt at creating a blog so please keep coming back to check in on my progress. The first topic of my blog is about limited editions in bronze sculpture. I need your opinions and feedback. I am trying to decide whether to go the traditional route and limit the edition of my new sculpture of Harry Manx to 12 or to have a larger edition of say 24, 50 or even 100.
First a little background. Up until recent times the material for making moulds for reproducing waxes for bronzes was gelatin. It was not very strong and after 9 or 10 pours the mould would start to break down. By the time 12 waxes were produced from the mould it was in such bad shape it had to be discarded. So 12 became the limited number of sculptures one could produce and this became the standard. Now, by legal definition, a bronze sculpture is considered an "original" in an edition limited to 12 and any more produced are considered "copies". In the last 50 or so years rubbers have been developed which can last for many years and are able to produce thousands of waxes. After O.C.A. (Ontario College of Art)-now O.C.A.D. (Design) where I learned how to sculpt, make moulds and bronze cast I got a great job working for a small company which made small figurative bronze sculptures. It was a fantastic apprenticeship and a job that I enjoyed going to every day. We produced sculptures that had edition numbers of 250,500 and even 999. They advertised in magazines like "Architectural Digest" and "The Connoisseur ". 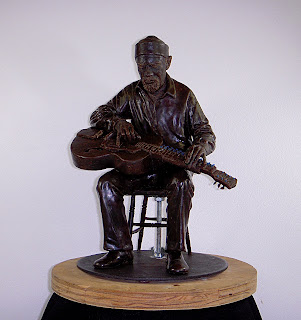 I have just finished creating this sculpture of Harry Manx which took many many challenging hours to complete. It was a very satisfying endeavor and I loved every minute of it and the agony and ecstasy of sculpting may be my next blog topic.


My question is; do I limit this to 12 only to find out that more than 12 people would have bought one or do I keep it rare and limit it to 12? I guess this blog is market research to try and answer that very question.The cost of creating a mould,casting a wax,cleaning the wax, casting in bronze,finishing the bronze, patinating the bronze and mounting it on a base are all factors which add to the overall cost of the finished piece. I am going to be charging $3200. CAD for this sculpture. I guess you could compare it to a musician making a cd and then only selling 12 of them. Doesn't make sense does it? Why should art be different than music. I know there are a lot of holes to be poked into my argument but I better stop now so this doesn't become a book. Blogs aren't meant to be too long.
I am really looking forward to any feedback anyone may have regarding this question.

www.redeft.ca
Posted by Peter Sloan at 5:02 AM 5 comments: